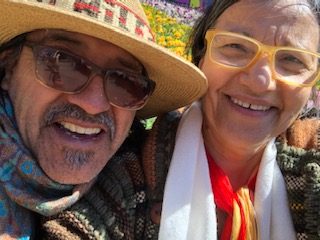 Segundo Nitor started his artistic career in Chile following a 3-year detention as a political prisoner of the Chilean regime from 1973. Through community workshops he developed his skills in jewellery making, woodcarving, picture framing and writing poetry.

Subsequently he was invited to work as a Picture Framer for a published and prolific poet in Santiago. He eventually opened his own Gallery and Framing workshop but had to leave it and his country owing to the harassment and serious threats to himself and his family by the regime.

In 1995 he made his way to Mossman North Queensland where he had partnered a local woman, Angela Zammataro, who he met in a Chilean choir in Melbourne and with whom he formed a Latin band, Los Caracoles.

He reopened a Gallery and Picture Framing studio in Mossman but also began to set his poetry to music. Since then he has penned scores of songs for the band which now comprises 6 members and includes members of the well-known young Blues band The Montgomery Brothers.

Mossman Picture Framing & Gallery has been a focus for community involvement through art exhibitions involving local artists as well as musical events such as Café Art, which includes presentations of music and spoken word by local performers, as well as traditional food.

After a 23-year trajectory Los Caracoles continue to pen a swag of original fresh and new music in authentic Latin rhythms from many parts of Latin America, with a dash of Italy. Their set ranges from soulful serenades to joyful dance rhythms but their audiences want to dance from the first note!  Their subject matter includes love for the natural environment, peace, lofty heroes and Latin larrikins. This year they received a RADF grant to record their 4thalbum.

Their diverse backgrounds (Chilean, Italian, Japanese, Indigenous Australian/Maori) add to the distinctive flavour of their music, unique in NQ.